The Linseis Differential Scanning Calorimeter (DSC) is a thermal testing instrument used for measurements of material properties such as transformation temperatures, enthalpies of transformation, and heat capacities. It is capable of measuring temperatures up to 500°C and can use both solid and liquid specimens. 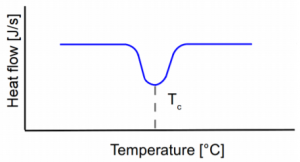 Example of a crystallization ‘peak’ in a plot of heat flow against temperature. Crystallization is an exothermic process, so the heat flow to the sample must be decreased to maintain a constant heating rate.

The polymer chains are able to move around freely at the melting temperature ([math]\displaystyle{ T_m }[/math]) and thus do not have ordered arrangements. Melting is an endothermic process, requiring the absorption of heat. The temperature remains constant during melting despite continued heating. The energy added during this time is used to melt the crystalline regions and does not increase the average kinetic energy of the chains that are already in the melt. In a plot of heat against temperature this appears as a jump discontinuity at the melting point. The heat added to the system during the melting process is the latent heat (enthalpy) of melting and can be calculated from the area of a melting peak observed in a plot of heat flow against temperature. The [math]\displaystyle{ T_m }[/math] is defined as the temperature at the peak apex. After melting, the temperature again increases with heating. 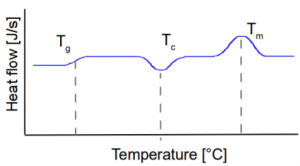 Typical DSC heating plot for a polymer that undergoes a glass transition, crystallization and melting.

It is worth noting that not all polymers undergo all three of the aforementioned transitions during heating. The crystallization and melting peaks are only observed for polymers that can form crystals. While purely amorphous polymers will only undergo a glass transition, crystalline polymers typically possess amorphous domains and will also exhibit a glass transition. The amorphous portion only undergoes the glass transition while the crystalline regions only undergo melting. The exact temperatures at which the polymer chains undergo these transitions depend on the structure of the polymer. Subtle changes in polymer structure can result in huge changes in [math]\displaystyle{ T_g }[/math]. In a perfectly crystalline polymer, the plot of heat against temperature has a jump discontinuity at the melting point. The plot of heat against temperature is continuous for the glass transition, but plot is not smooth (the slope at [math]\displaystyle{ T_g }[/math] is different depending on if you approach the point from the right or the left). 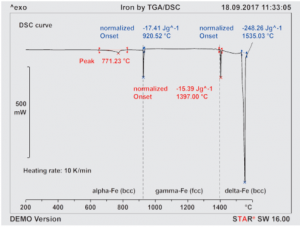 In metals, heat capacity and melting/solidification information can be determined through DSC, as well as other solid-solid transitions such as the Curie transition (where magnetic properties change from ferromagnetic to paramagnetic) and transitions between different types of crystal structure. 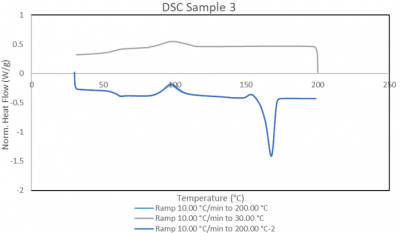 DSC has several test parameters that are crucial to set to proper values based on the sample(s) being tested in order to obtain the best data possible. These include the endpoints, ramp rate, and number of heating/cooling cycles. The endpoints when testing an unknown polymer should be determined by the maximum temperature that the DSC model is capable of and the degradation temperature of that polymer (can be found from TGA). Changing the ramp rate of the DSC can affect the sensitivity and resolution of the measurements and the appearance of the curves. A high ramp rate (such as 50°C/min) increases sensitivity at the cost of resolution, while a very low ramp rate (0.1°C/min) could cause the sample to undergo unwanted annealing/crystallization. Multiple heating/cooling curves are used when a polymer has undergone processing to find its intrinsic values, while the first heating curve shows any processing the polymer has undergone.

where [math]\displaystyle{ \Delta H^\circ_m }[/math] is the melting enthalpy for a 100% crystalline sample (found in literature).