Thermogravimetric analysis (TGA) uses heat to force reactions and physical changes in materials[1], and provides quantitative measurements of mass change associated with transition and thermal degradation. TGA records changes in a sample's mass from the dehydration, decomposition, and oxidation of a sample against changes in time and temperature. The characteristic thermogravimetric curves of materials and chemical compounds are given by unique sequences of physicochemical reactions, which occur at specific temperature ranges and heating rates depending on the sample's molecular structure.

For classic thermogravimetry, a sample is usually put into a crucible out of inert material (e.g. platinum, alumina, gold…) and placed on a sensor within a furnace that can apply controlled atmospheres and temperatures[2]. The sensor is connected to a high-resolution microbalance that records the mass change during the experiment. In most thermogravimetric analyzers, compensation balances are used for this purpose. A compensation balance is a special version of a balance where an electric magnet compensates the applied mass-lab balances often work according to the same principle. While the sample sees a change in heat, the balance is usually kept in a static temperature environment in a separate chamber or at a certain distance from the sensor. The exact temperature of the sample is monitored by thermocouples that use the Seebeck-effect for precise temperature determination. 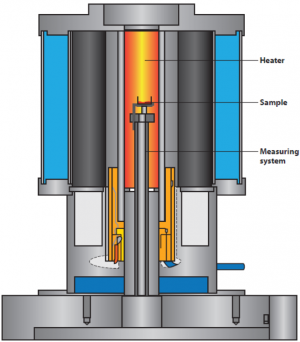 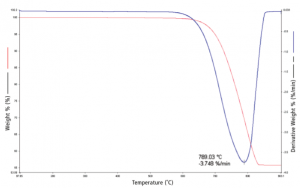 TGA gives a mass vs. temperature plot. The derivative of mass vs. temperature is known as “DTG”, and can also be plotted against temperature. The degradation temperature of samples can be found from the largest value of DTG (point of fastest degradation). The 5%, 50%, and 99% mass lost temperatures (where applicable) can be determined from the initial mass. The primary component of initial weight loss is usually evaporation of moisture and other volatiles. At larger values of weight loss weight loss the primary factors are typically pyrolysis, reduction, and desorption. Multistage decomposition is also common, and shows as a step-like pattern. In some cases, these steps may blend together during dynamic (continuous heating) TGA, necessitating either far slower heating rates, or step-wise methods like quasistatic (heating at intervals) TGA.

Note that TGA itself may not be sufficient to identify the decomposition products; chemical testing of the sample after TGA analysis is often required to ascertain the identities of suspected decomposition products. TGA itself does not identify substances; other methods such as chemical testing or differential calorimetry must performed alongside TGA to verify the identity of products.

TGA is vital when designing materials that are intended to withstand high temperatures, as if there is even slight decomposition of the material at a temperature that the material would be expected to encounter, devices made of the material may fail over repeated use. The carefully controlled environment of the TGA analyzer also allows for measuring decomposition reaction kinetics. Differential scanning calorimetry can be incorporated into the TGA analyzer to allow for monitoring potential phase changes.